My year in England

On September 5, 2018, I boarded a plane to the north of England, filled with conflicting feelings. On one side, the fear of the unknown, the stress and "what if it goes wrong? " together with the sadness of leaving my loved ones, and on the other the excitement, the joy and the desire to discover this new life.
Justine Bosset, Ucrew 2019/2010 England
Del Facebook Twitter E-post

Before leaving for England, I spent two weeks in Norway, in Mandal, at a center with other young people who were part of the same program as me: Ucrew. And what is Ucrew ? Ucrew is a program proposed by NMS (Norwegian Mission Society) that sends young people across Europe: Estonia (Tallinn), France (Lyon / Nîmes), Spain (Barcelona) and of course England. After these 15 days together, we were able to bond and reassure each other concerning mutual fears and uncertainties.

There were 6 of us in the Cumbria region: 3 in the south in different villages and 3 in the north, in Carlisle, the city where I spent the last 10 months. We all worked for one parish or several, each with different tasks depending on the needs of the placements. For my part, I was part of St. James Church, where I helped to set up certain activities with children / families, but mostly I worked  in a community café (Cornerstone) and a second-hand shop (OpShop) belonging to the church. The main purpose of this café is to be able to form a united community and helping those in need to move forward in life, and sometimes closer to God.

The products in the OpShop are cheap, and even with the possibility of having things for free through the system of «suspended coffee / cake». There is a food bank available for people who can not afford to get enough food and the atmosphere is always warm. Events such as movie nights, games, prayer, karaoke are regularly organized to spend good times with friends and family. The concept of second-hand stores, extremely popular in the UK, is actually very simple: instead of throwing away old things, they are given to the store, which sells them for little money, thus avoiding waste. Almost new clothes or unused dishes can help people in financial difficulty. The majority of the profits go to the church or provide for free coffee.

During the stay in Norway, we were shown a graph with a curve representing how our general feelings, our mood and «happiness» would look like during the year, and the explanation we were given was fairly accurate and consistent with my experience.

Curve showing how our mood would look like during the year.

The first part of the curve represents the arrival in a new country. In the beginning we see things  through the eyes of the tourists, where everything is new, people are welcoming, it feels like being on a small cloud. It was at this moment I realized the autonomy, the freedom that I had. Then comes the end of autumn and the beginning of winter. The weather becomes grayer, darker, the temperature drops, and the routine settles. It is at this moment when everything is at the hardest. This is when we start realize that it is not only in the beginning there are obstacles, fears to overcome and that we miss our loved ones. Speaking another language is also very tiring, especially since I lived only with people who do not speak my native language, French. And despite a fairly fine cultural barrier, you end up feeling alien and different and you can easily feel apart.

Ucrew on infield gathering in London

However, I was fortunate to be surrounded by very caring people, connected or not to NMS, who helped me through this period, which lasted for me until the end of January. Fortunately, I was able to go back home for Christmas to see my family and my friends, followed by 4 days in London with all the Ucrewers. Sharing your experience with people who are in the same situation actually helps a lot. It helps you to put things into perspective and reassure yourself. After a few months, happy moments, more difficult moments, incredible encounters, habits are taken, places and people become familiar and life gets easier. Whence the rise of the curve!

One of my favorite things during the year was the ability to travel. I had the opportunity to visit several places in the United Kingdom: Newcastle, London, Manchester, Liverpool, Glasgow, Edinburgh, and especially the Lake District, which is simply magical.

Nevertheless, the best moments were those shared with the other girls in the program. We all lived quite close to each other, and every two months we met for training days, to share our feelings, to learn more about our faith and our way of managing work and life in general. We also often met up when we had days off.

At the end of June, as the year drew to a close, we all went to Barcelona for a week of debriefing where we once again shared our experiences, but also laughter and relaxation. This was the perfect way to close this exchange year.

Thanks to this year, I have discovered new perspectives about my faith and the world around me. I am so grateful to all the people who made this possible, to NMS leaders who have been very present and attentive to any problems, but especially to God. One thing that must be kept in mind during times of doubt is to be able to let go. Everything cannot be perfect, but everything can be beautiful if you decide to take life on the right side. It is when you decide to do exactly that, that everything suddenly seems easier. 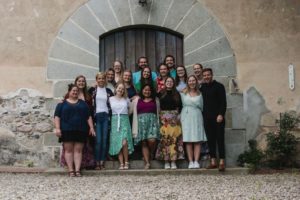 Ucrew on debriefing in Barcelona