Last ned
EID(Engasjert Inspirert Dedikert) is the name of the active group of young leaders at Slettebakken church. After all the activities that the young leaders were in charge of in the church and all which are still coming up,the church organised every year a camp for them where they spend time together,have fun and learn how to become a better and even more effective leader.This year, I was lucky to be part of that camp.
Del Facebook Twitter E-post

From the moment I discovered the church , I could notice that the slettebakken church is really decided to involve  youth in all activities and events.The church is making sure that everything is okay with the young leaders and supporting them through their development. The “EID tur” is part of program that the church established to support and help the young leaders in their Journey as leader at church. 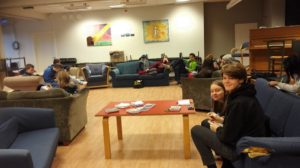 This year,the camp took place at Kvamskogen from the 31st of january to the 2nd of february.The committee  was composed by the former young leaders at church which made this camp even more interesting and fun because they all knew one another very well,it was like family gathering.

The evening I arrived there with the 38 participants ,we had a seminar with a lady called Marianne Magnussen and the seminar was focused on “how to include a new person” as the the Theme of this camp was”Inkludering”. This seminar was one of my favorite moment during this camp. It was really interesting  because it was the first time that I spent more than 4 hours on a topic I thought natural and I took for granted. I learned the importance of things that I thought was not a big deal before when it comes to “breaking the glace” and “including”. One of them was my “hand shake”,  I did not really pay attention to how I did it and I have just learned there during the workshop how to do it properly here  as it is ,I think one of the first impression that  people get when you meet them for the first time.We talked about the “why” ,”how” and “what” is including a new person and I think it will be useful for the participants in the future as it will be for me. 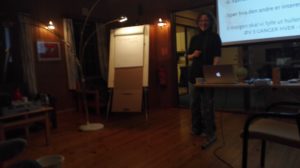 As I have already mentioned ,the committee was composed by 8 former young leaders at slettebakken church. They were in charge of the organisation of the camp and the activities.During the whole camp,we had a box where the participants could drop their anonymous questions.The last day , the committee took a moment with us and responded to all the questions in the box. It was also an unusual experience for me because we had some questions that I have never heard in my own sending organisation .This method could be useful in my organisation as well .For me this last activity reflected just how committed is the church to the young leaders well being,personal development ; the leaders responded and gave advices according their own experiences openly and the participants could comment or give their point of view freely. 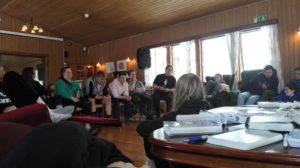 The camp was not just a succession of seminar and discussion.As any other camps that I attended here in Norway ,we had fun together whether during the outside activities or the inside activities, I could spend more time and get to know more some young leaders  at church that I did not really know before.Both the participants and the leaders are really closed to one another so it was really easy to have fun together,I think everyone felt included .My teammate and I had a seminar about Madagascar,we were more focused on the culture that time and showed short video about the Malagasy tradition called “Famadihana” . We ended the presentation  by teaching to the participants a Malagasy danse. 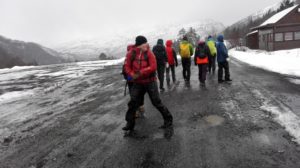 We ended the camp at church with a service called AUFA(Av Unge For Alle)which means by Youths for Everyone. The participants was in charge of the whole organisation of the service. They were in charge of reading,the”Andakt”,the singing,… .The service was attended by the participant’s parents. 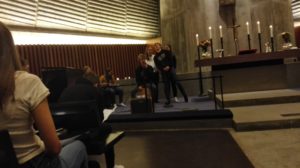